This evening I answered the American Jewish Council’s call to #showupforShabbat at a local Synagogue in order to show support for the Jewish community in the United States and around the world after the horrific event in Pittsburgh last Saturday.  Driving home I was reflecting on the evening and the lyrics to Mandisa’s song above came to mind.

We all bleed the same.

I grew up in the United Methodist Church.  I’ve never experienced any other type of religious service other than Christian.  While I’ve experienced many services across multiple denominations – Anglican, Methodist, Baptist, Catholic, Episcopalian, Non-Denominational, Charismatic, Pentecostal, and Plymouth Brethren…to name (more) than a few – I’ve never attended any worship service outside my own religion until tonight.

I felt, in the wake of the tragedy and knowing several Jewish people, showing support by attending the religious service of another faith was important in this day in age.  I shouldn’t be surprised, but guess what, we aren’t that different.  Total shocker, I know (please read the sarcasm).

Nervous and excited to show my support by attending a Shabbat service at a local synagogue, I parked my car and sat there for a few minutes praying The Lord would open my heart and mind to listen, observe, and support.  I watched a few groups of people walk into the synagogue before I got the courage to follow them to the door.

I started to pull the handle when I realized the building was locked; I can’t say I blame them, security is (sadly) a big concern for all religions right now.  I know our church has even talked about locking the doors once the services begin in order to protect parishioners.  A young man jumped up and let me in the door, directing me toward the sanctuary.

Walking down the hallway I observed different artifacts reflecting the history of the Jewish community in the Charleston area – not unlike historic churches that proudly display their histories.  As I was looking at a collection of dreidels, the rabbi came up and introduced himself, leading me into the sanctuary and providing me with a transliterated copy of the service, as I do not read or speak Hebrew. I sat near one of the back rows and began looking through the prayer book, remembering Hebrew is written left to right and the “end” of the book is actually the beginning. 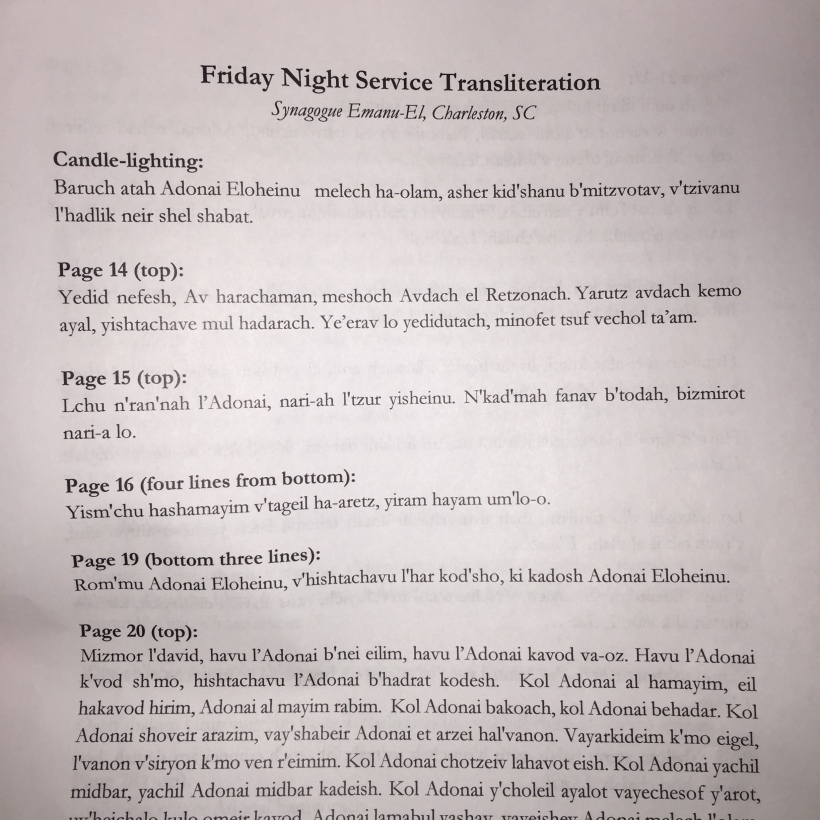 I smiled as I could easily follow the prayer book based on what the rabbi had given me, and thankful for my experience with the Book of Common Prayer used by the Anglican church.  I observed families coming in and waving to friends across the sanctuary.  So many similarities to how services in the Christian faith begin, to include the lighting of candles.  Granted, I realize we have the same God and the Christian faith was born of the Jewish faith, but without ever having studied much on any faith but my own, I wasn’t sure what to expect.

Fortunately, the rabbi, anticipating an influx of non-Jewish attendees, explained much of the service as he performed it; similar to when Anglican priests perform a dictated Eucharist for those who do not understand what is happening during that portion of the service.  As the service continued, it reminded me of my own services in the Anglican church – much sitting and standing, singing and praying.  The Hebrew singing of Psalms was beautiful and I was grateful I could read the English translation in the Prayer Book as they spoke in Hebrew.

I looked around often during the service, just as I had the first time I attended a Charismatic or Catholic church service, observant to my surroundings and how others practice their faith.  The only time I felt incredibly uncertain was when cups were passed around with wine.  In the Christian faith, you only partake in the Body and Blood of Christ if you have been baptized in the faith; I wasn’t sure if the wine being passed around had a sort of symbolism to it, like that of Holy Communion for Christians.

Finally, when the woman passing around the cups came to me – a definite visitor, complete with the printed transliterated paper – and offered me a cup, did I take it and say, “L’Chaim” after the rabbi.  Admittedly, I feel a little guilt over having participated before knowing why was participating, but when I learned that it is to usher in joy and gladden the hearts of men and God, I felt better knowing I hadn’t intruded on a sacred faithful-believers-only ritual.

As the service came to a close, rather than a congregation holding hands and praying a blessing over one another, parents laid hands on their children and prayed blessings over them. A beautiful way to end a service, most certainly. I chuckled a little as the rabbi kept having to wrangle in his daughters, one of which only seemed to be a little older than Vivienne, to get them to sit still and look at the Prayer Book.  Apparently, rabbi’s kids and preacher’s kids tend to act the same.

Walking out, a police officer was standing guard at the doors to the synagogue and let me out of the building.  Stepping out into the warm November evening, I looked up to the dark sky and said a prayer for humanity.  I weep for this world and pray for salvation for so many, as hate fills hearts and fear spreads like fire.

This is not the world in which I want my daughter to grow up.

I don’t want her living in fear that her place of worship could be the target of hate.  Even our church, our rural Anglican church, has talked about having police presence.  I want Vivienne to have friends of other faiths, races, nationalities, and backgrounds; honestly, I want that for myself and my husband.

Change begins with us – those of us willing to cross boundaries between faith, politics, race, and beliefs.  It begins with those of us who are willing to stand up in support for groups of people targeted by hate – to include other Christians.  It is time we stop hiding behind our own fears and reach across the boundaries dividing our communities, our country, and our world.

The more we try to understand one another and see the world through a different set of eyes, the more we are learning to love as Christ loved. So often I think Christ would condemn the behavior of many Christians today; concerned with material “joys” and self, over concern for our brothers and sisters (saved and unsaved).

My challenge to you is to step out of your comfort zone this week and show support – or at least have a civil conversation – to seek understanding for a community, race, religion, or political belief that is opposite of your own.

Open your eyes.  Is this the legacy we want to leave for our children? One of fear, hate, and anger?  Or do we want to leave a legacy of Christ-like love and servitude to those who are different from us?

I know which I will choose.

Soul of a Sailor – Kenny Chesney